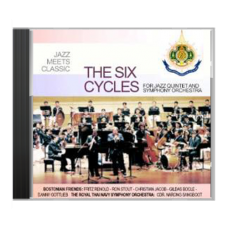 December 5, 1999 is the 72nd birthday of His Majesty King Bhumibol Adulyadej, which is celebrated in Thailand as the completion of his sixth 12-year life cycle. The idea to combine jazz and classical music in the composition “The Six Cycles” was born early this year in the correspondence between Fritz Renold of the jazz group Bostonian Friends and Heinrich Schellenberg of the Swiss Embassy in Bangkok. Renold was at the time in the process of organizing an Asian tour of the jazz quintet to perform, together with symphony orchestras in the region, the Helvetic Suite, a piece he co-composed with Christian Jacob. The Swiss Embassy was in the midst of preparing a series of cultural events as a tribute to His Majesty the King. Renold’s suggestion to compose a suite in six movements for jazz and symphony orchestra in honour of His Majesty was received with immediate enthusiasm by the Swiss Embassy, which was able to secure the sponsorship for the composition and the premiere in Bangkok. Zuellig Thailand commissioned and funded the composition, while Pro Helvetia, Switzerland’s national endowment for the arts, sponsored the Asian tour of the Bostonian Friends. Renold and Jacob wrote and orchestrated “The Six Cycles” after intensive research of the life and deeds of His Majesty King Bhumibol, who has always cultivated a passion for jazz and classical music. To the composers, “this work is a source of great honour, pride and enjoyment”. They feel that special circumstances have distined them for the composition. “Bangkok, Boston, France and Switzerland are important points on the map of ‘The Six Cycles’ ”, that is both in the life of His Majesty as well as for the composition itself. Renold hails from Switzerland, Jacob is French, their friendship started in Boston, and their artistic cooperation now extends as far as Bangkok!